Open up kioptrix in one vm

Open up kali in 2nd vm

Both vm’s are “bridged”

We do know that the following services are running: (from the details provided on vulnhub)
• Apache
• OpenSSH
• RPC
• Samba

When the OS boots up an IP is assigned. Use netdiscover to find hosts on the network.

one of the services running is Samba.

Linux (UNIX) machines can browse and mount SMB shares. Note that this can be done whether the server is a Windows machine or a Samba server.

An SMB client program for UNIX machines is included with the Samba distribution. It provides an ftp-like interface on the command line. You can use this utility to transfer files between a Windows ‘server’ and a Linux client.

Most Linux distributions include the useful smbfs package, which allows one to mount and umount SMB shares

Samba 2.2.8 and earlier versions have a buffer overflow vulnerability that could potentially allow an adversary to execute arbitrary code remotely. 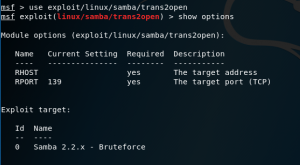 Again, it did not work…but turns out there is a public Samba exploit that does.

Exit out of Metasploit

Go to the location of exploit

Run samba exploit where -b=0 is linux, -c is the connectback ip address (kali box), and the host ip (kioptrix box)